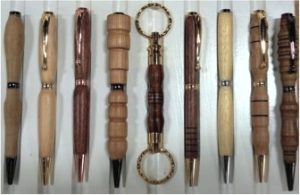 Montgomery County Woodturners (MCW) is assisting the Walter Reed National Military Medical Center (WRNMMC) in Bethesda in their efforts to provide therapy to Wounded Warriors in the final stages of recovery prior to returning to their units. MCW, in cooperation with the Wood Workers Club (WWC), provides basic instruction in various aspects of woodturning followed by MCW member volunteers providing guidance as the Warriors craft pens for themselves.

MCW’s involvement with the Wounded Warriors Project was started in 2009 by Bert Bleckwenn who, with MCW volunteers, assisted Warriors with making pens and key chains. Sessions were held monthly at Walter Reed Medical Center in Washington D.C. MCW loaned lathes to the program as well as provided funds for turning supplies and obtained grant support through the American Association of Woodturners. Upon closure of the Walter Reed Medical Center and consolidation with the National Naval Medical Center in Bethesda, MD, the available space was deemed insufficient to continue the program at that location. At that point The Woodworkers Club became actively involved and provides valuable logistical support, including use of lathes and space at their location in Rockville. The WWC also leverages the corporate sponsorship of the Woodcraft Corporation through their Turn for the Troops program.

How MCW is helping now

MCW and The Woodworkers Club provide regular pen turning sessions to Wounded Warriors. Together we supply the location, facilities, lathes, materials, volunteers, and one-on-one instruction in pen turning so the Warriors, most of whom have no prior turning experience, can personally design and produce a pen, and occasionally, a key chain, in a single session. We also support the Woodworkers Club in Woodcraft’s Turn for the Troops program where typically several hundred pens are turned and donated to troops overseas and in other recovery facilities. All members of MCW are volunteers in this effort, whether you know it or not, through the financial support provided by the club. I would like to personally thank the regular volunteers Jack Enders and Bob Browning, without whose efforts and commitment the program would not be possible. All MCW Members are strongly encouraged to drop in to experience a session for themselves. Our members unanimously report that these sessions are extremely rewarding to them, as well as to the Warriors.

The Wounded Warrior program restarted in March 2011, and in 2019 a second session has been added most months. Sessions are generally held twice per month, on a Wednesday from 12:00-2:00 and a Friday from 12:30 to 2:30 at the Woodworker’s Club in Rockville. Check the calendar to be sure of the dates and times each month. Contact Don Van Ryk (dvanryk@niaid.nih.gov) for information on volunteering and up-to-date scheduling information. Please review the Volunteer Guidelines before volunteering.